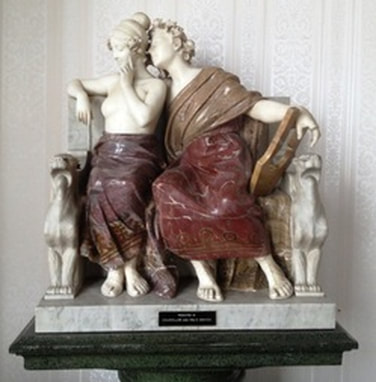 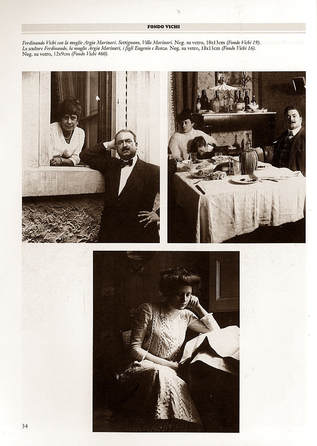 Photos: Ferdinando Vichy and his wife, Argia Marinari
THE MARBLE
An Italian vari-coloured marble figural group depicting a classical maiden and her suitor seated on a stone seat. The flesh parts are in white marble, she with a naked upper torso, her drapery in purple-veined marble enriched with gilding, he cloaked in veined ochre-coloured and griotte marble with his left hand resting on a lyre.  The bench is veined grey marble, the arms terminating in winged lion supports, on a plinth base applied with a presentation tablet inscribed 'Presented by Councillor and Mrs Kenyon', on a verde antico (ancient green) marble stop-fluted Corinthian pedestal.  Councillor Ernest Kenyon was the Mayor of Lytham St Annes 1950-1951.

The sculpture represents Orpheus and Eurydice as a courting couple, before Eurydice dies and Orpheus goes to the underworld after her.
We believe this work was modelled by his wife and main model, Argia Marinari, who facially resembles the female figure in this sculpture.

Story of Orpheus and Eurydice
Orpheus was the son of Apollo and the Muse Calliope. He was presented with a lyre by his father and was taught to play it, becoming a . great musician. When he grew up he fell in love with Eurydice, a beautiful nymph, they got married and were very happy, although only for a short time. One day, Eurydice was wandering with nymphs and was seen by a shepherd, Aristaeus, who was struck by her beauty. She fled, but got bitten on the foot by a snake and died. Orpheus was so distraught that he followed her to the Underworld where he  played music to the Guards of the Underworld and Hades, God of the Underworld. They came to a compromise. Orpheus was allowed to go back with his wife on condition that he never looked back till they reached Earth. However, unfortunately, reaching almost to the end, Orpheus thought it was a trick and looked back. Then his wife disappeared and he lost her forever.

Ferdinando Vichi was born in Florence in 1875 and died there in 1941 (some sources state 1945).  One of the leading Tuscan sculptors of his period, he was a well-known and much appreciated craftsman who produced numerous works of art, including busts and tombstones.


Vichi is associated with the sculptors Cesare Lapini, Pietro Bazzanti and Guglielmo Pugi, all of whom executed works at The Galleria Bazzanti. The gallery, originally Bazzanti's studio, was inaugurated in 1822 and is still open today. His compositions are varied in subject matter, ranging from busts after the Antique to orientalist themes and Renaissance-inspired models. Like many other late nineteenth-century sculptors, Vichi often took inspiration from classical antiquity. Historicising romantic subjects were very popular in Italian sculpture of the late 19th century. He worked in marble and alabaster and his works regularly appear at major auctions.

Follow this link to read about his life as provided in any interview by his great-nephew, the Italian writer Marco Vichi.


OTHER WORKS BY VICHI
REFERENCES