Dorothy Ward Mosedale was born in Burnley on 25 April 1896 to Ward Mosedale (1862-1940) and his first wife, Eleanor Greenwood
(1863-1903) of Rawstenstall. They married on 22 May 1892 at St Peter’s Church in Burnley and at that time they lived at 10 Tennis Street, Burnley. Eleanor’s father, William, was a cotton loom overlooker and in the 1891 census her mother, Margaret, then a widow, was working as a manageress of a linen establishment. It may not be unreasonable to presume therefore, that this was Mosedale Bros and was, in all probability, where Ward first met Eleanor.

Mosedale Brothers, Hart Street, Burnley, was a baby linen manufacturing company established by Ward and his brother, John. However, by 1901 the firm had debts, possibly accrued by John, as in November 1901 there were notices in both the London Gazette and Burnley Express about the dissolving of the partnership, by mutual consent, between John Mosedale and Ward Mosedale, with all the debts being paid by Ward.

Ward was born in October 1862, son of Abram Mosedale, a moulder, and Jane Ward. His parents married at St Peter’s Church, Burnley and went on to have six children.  The 1891 census records the family as residing in Burnley.

Ward had few interests outside his business activities and when he died, aged 77, he was governing director of Bank Top Manufacturing Company, Burnley, which at that time was manufacturing women’s overalls. 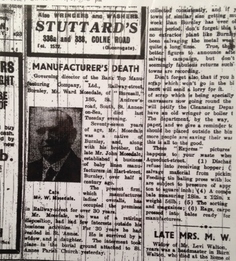 Dorothy never married and, as an only child, was able to enjoy being a wealthy, generous and glamorous woman. She died in 1970, aged 74, and was buried in St Annes Parish Church
along with her father and stepmother.

Dorothy also left four paintings to Burnley Corporation for Towneley Art Gallery and four to Lytham St Annes for the Art Gallery.  In her extensive Will she also left  paintings, jewels, furs and other expensive items to friends and family, including her house cleaner, Louisa Jane Mason, known as Winnie, for the kindness she had shown to Elizabeth in her later illness.


Extract from Dorothy Ward Mosedale's Will:

To Burnley Corporation for Towneley Art Gallery in memory of my father Ward Mosedale the following three pictures by Heywood Hardy;-
The Meet
A Refresher at the Dragon
The Two Roses
and Evening in the Meadow by Sidney Cooper.

To Lytham-Saint-Annes Corporation for the Art Gallery my Mahogany Cabinet and the Ivories contained therein in memory of my father and mother Ward and Elizabeth Mosedale and the following four pictures: -
The Proposal  by F Andreotti
In Disgrace by C Burton Barber
L’impatien by Landini
Mes Deux Petits Amis by Landini

The ivories are not minor objects; several Japanese ivories are in excess of 30cm in height and are of high quality carving from the Mieiji period, 1868-1912. They are not only interesting by virtue of subject matter but also by country of origin, with examples of Indian and Chinese and Japanese work.