Thomas appeared in a number of charity plays in the late 1920s and early 1930s in London’s West End.  He engaged semi-professional players and professional make-up artists from London and superb costumes were hired from Brighton.  The last pageant, called 'Gloriana', was to honour the Coronation of Queen Elizabeth II in 1953.

Thomas sat as an understudy for a painting of Churchill, as he had a similar facial and rotund appearance.  After each sitting he received a cigar from 10 Downing Street and in 1952 met Sir Winston Churchill at a dinner given by the Junior Carlton Club who commissioned the portrait, now at Bath Conservative Club.

Thomas was a Fellow of the Zoological Society of London, elected in 1914, 1921 and 1923, following in the footsteps of Richard Ansdell  and some of his sons. 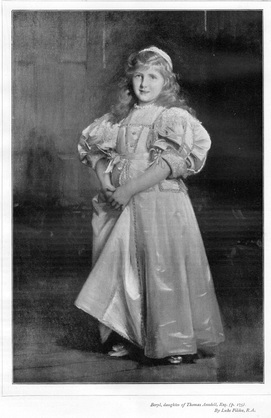 Beryl Constance Ansdell was born on 12 August 1889 whilst the family was still living at Beech Hurst, Hope Avenue, Pendleton.  She was married on 30 April 1914 at St James Church, Hope, Pendleton to Charles Philip Leese, who was born in 1889 in Salford, Lancashire.  Following her marriage she and her husband moved to Hope Court, Hope Bagot, Ludlow, Shropshire.  Charles Philip Leese was a cousin of Lt General Sir Oliver Leese, Chief of Staff to General Field Marshall Montgomery during World War II, who also lived in Shropshire.  Charles died in March 1947 at Ludlow.  Beryl Constance died in 1961 and was buried with her husband.