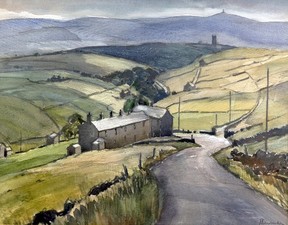 Warburton, Stanley (1919-2012) Hebden Bridge, watercolour size 17.5 x 14 in (45 x 35 cm) gift from Sheila and Dan Warburton, Lytham St Annes April 2013
Sheila Warburton, nee Lomas, was born on 2 March 1926 in Gawsworth, Macclesfield.  She had one sister, Barbara, who married and moved to Pennsylvania in the USA at the end of the Second World War.

Sheila became a primary school teacher, working in schools around the Rochdale area for many years.   Maurice Arthur Greenwood RCA contacted us to say that he knew both Stanley and Sheila very well from an early age.  He knew Sheila before she met Stanley and remembers her coming to his home in Castleton to practise her singing, his father playing the piano.

She married Stanley in 1962 and remained a constant and generous support to him as he followed his lifelong passion for art, which included extensive research, writing and lecturing commitments.  On his retirement they moved to Lytham St Annes, both quickly becoming involved in the local community.

They had one son, Daniel, born 1963, named after his paternal grandfather, also a talented artist.  Dan went on to gain a first class degree in Music at Cambridge University and now lives in Paris with his wife and son, Max.