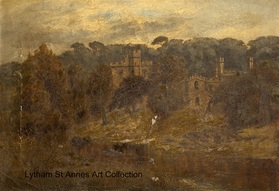 Notes: Records indicate that the donation also included
​"2 large unframed engravings and others” - no further details to date

Nellie Sharples Riley, born 1891, Gladys Mary Eastham Riley, born 1896 and Gwendoline Elizabeth Riley, born 1899, were the daughters of Thomas Sharples Riley and his wife, Margaret Alice, nee Eastham.  He was a paper merchant born in Ramsbottom in 1864. The two elder girls were born in Bury but Gwendoline was born on the Fylde. The 1901 census shows the family to be living in St George’s Road, St Annes on Sea and in 1911 in Gloucester House, 7 Orchard Road, St Annes. There, the women were engaged in the confectionery business.

It is recorded that the sisters lived for some time at Scar View, Levens, but it has not been possible to verify dates.  What is known is that they were in Lytham St Annes in 1939.
​