Anthony Vandyke Copley Fielding, commonly called Copley Fielding, was an English painter born in Sowerby, near Halifax and was famous for his watercolour landscapes (Rossetti, 1911). He was the best known and most prolific of a family of brothers who were all painters. He trained initially with his father, Nathan Theodore Fielding (fl.1775-1814), a portrait painter. He travelled with him to Liverpool in 1807 and then to Wales in 1808.

In 1810 he entered the Royal Academy schools where he was taught by John Varley (1778-1842), an English watercolour painter and astrologer, and a close friend of William Blake (1757-1827) (Rossetti, 1911).  Fielding was particularly proficient as a watercolourist - he exhibited regularly from 1810 at the Society for Painters in Watercolours (RWS), often sending 40 or 50 pictures a year. He became a full member and secretary in 1813 and president until his death in 1831.

He exhibited only 17 paintings, all oils, at the Royal Academy between 1811 and 1842   -  landscapes and views of buildings. He was one of the most fashionable drawing-masters of his day and in 1824 was awarded a medal at the Paris Salon, along with Constable and Bonington. His best subjects were views of mountain scenery in Scotland, Wales and the North of England. Although he also painted a few Italian scenes, these were from the sketches of others as he never travelled abroad.  Copley Fielding was championed by John Ruskin (1819-1900):
“No man has ever given, with the same flashing freedom, the race of a running tide under a stiff breeze, nor caught, with the same grace and precision, the curvature of the breaking wave, arrested or accelerated by the wind.”  Unfortunately, ​many of his watercolours have faded because of the use of indigo (Wright, 1978).

Examples of his work, painted 1829 to 1850, can be seen in the Victoria and Albert Museum, see below. 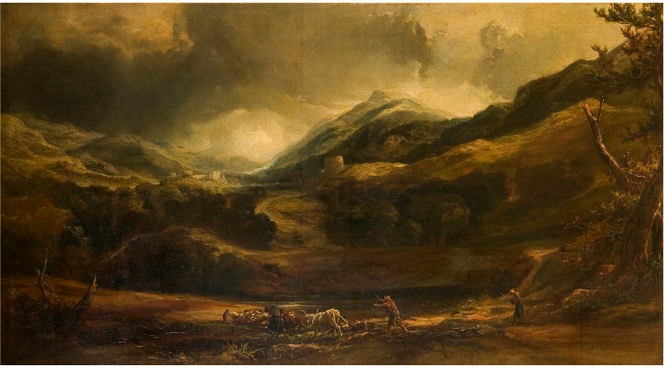 English Landscape, oil on canvas, ca. 1810-1855, by Copley Fielding, bequeathed by Henry Spencer Ashbee to V&A, no. 1849-1900
According to Ronald Parkinson (Catalogue of British Oil Paintings 1820-1860, Victoria and Albert Museum, 1990), this landscape is by Fielding and the cattle and two drovers are by John Linnell (1792-1882). Linnell also trained under Varley at the Royal Academy schools so they may have met there. There is a watercolour, The Beach at Lytham, by Linnell, in the Lytham St Annes Collection (V&A, 2015)