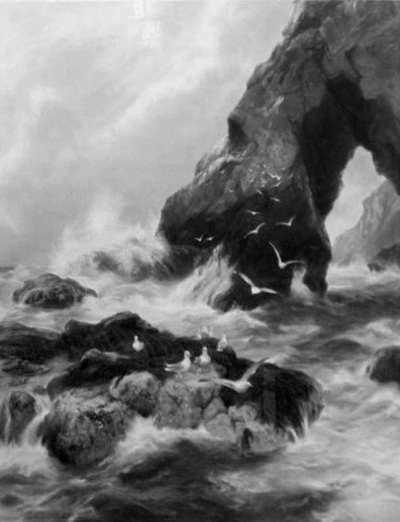 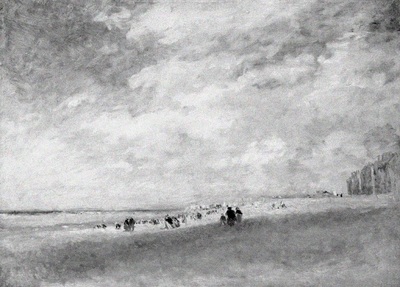 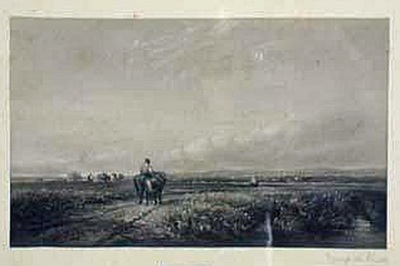 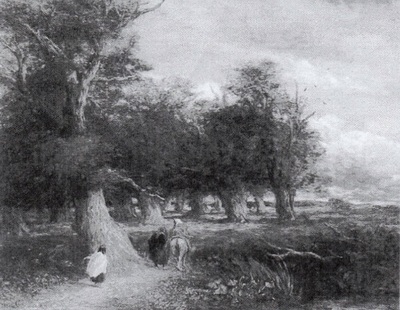 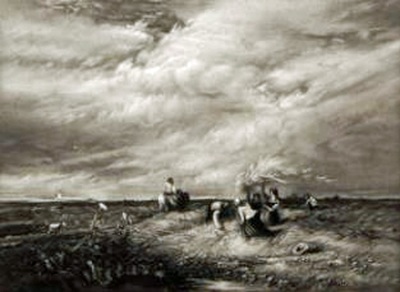 Joseph Bishop Pratt (1854-1910) was an engraver born at 4 College Terrace, Camden New Town, London North, on 1 January 1854. His father, Anthony Pratt, was a printer of mezzotints and his mother was Ann Bishop.

In 1868 he was apprenticed to David Lucas (1802-1881) with whom he remained five years. Lucas produced many of John Constable's (1776-1837) engravings. From 1829 until his death, Constable devoted considerable time, energy and money to the business of printmaking and publishing, activities that had concerned him hardly at all in earlier years. The principal outcome was a series of twenty-two mezzotints, engraved under his close supervision, by the young David Lucas and entitled Various Subjects of Landscape, Characteristic of English Scenery, from Pictures Painted by John Constable RA, generally known today simply as English Landscape. Lucas also engraved several larger plates on his own initiative and, after Constable's death, some further small plates intended to supplement English Landscape.

The first plate for which Pratt received a commission, Maternal Felicity, after Samuel Carter, was published in December 1873.  For the firms of Agnew, Graves, Lefèvre, Leggatt and Tooth he engraved many plates of animal subjects, after Sir Edwin Henry Landseer RA (1802-1873), Briton Riviere (1840-1920), Peter Graham (1836-1921),
Rosa Bonheur (1822-1899), whom he visited at Fontainebleau, and others; these were varied occasionally by figure subjects and landscapes after John Constable and David Cox (1783-1859).

Pratt's early engravings were chiefly in the ’mixed' manner, a combination of etching, line work and mezzotint, but a second period in his career began in 1896 from which date he confined himself to pure mezzotint and almost exclusively to subjects after the English painters of the Georgian era, who had then come into fashion. Plates commissioned in that year and published in 1897 by Messrs Agnew, after Raeburn's Mrs Gregory and Lawrence's Mrs Cuthbert, met with great success and Pratt was subsequently much employed by the same firm in engraving pictures by Thomas Gainsborough (c1727-1788), Joshua Reynolds (1723-1792), George Romney (1734-1802), John Hoppner (1758-1810) and their contemporaries. In doing so, he limited himself to subjects that had not been engraved before.

He continued to engrave a series of subjects, after Graham, for Messrs Tooth (Pratt's engraving Where Only Sea Birds Roam is after Graham's 1903 And There is Never Silence on that Shore) and was also selected by Sir Samuel Luke Fildes (1843-1927) to engrave the state portraits of Edward VII (1902) and Queen Alexandra (1906). One of his last important plates, The Countess of Warwick and her Children, after Romney, was published by Messrs P & D Colnaghi in 1909.

Pratt purchased the set of mezzotinter's tools that had been used by Samuel Cousins (1801-1887) from the widow of Thomas Oldham Barlow (q v Suppl. I), their late owner.

Exhibitions of Pratt's engravings held by Messrs Agnew at Manchester and Liverpool in 1902 and by Messrs Vicars in Bond Street in 1904 proved him to be the foremost reproductive engraver of his time. A considerable, though incomplete, collection of his work is in the British Museum.

Pratt long resided at Harpenden, Hertfordshire, but moved to Benchley in Kent in 1907.
He died in London following an operation on 23 December 1910.  He had six children by his marriage on 26 August 1878 to Caroline Almader James, who survived him. His eldest son, Stanley Claude Pratt, born on 9 June 1882, an engraver, was a pupil of his father; his first plate was published in 1904.