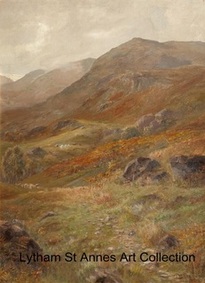 On the 1881 census her father's occupation was given as a schoolmaster, living in Castleton, Rochdale.  However, in 1891 he was described as a commercial traveller in books, and the family was living in Barton upon Irwell.

By 1908 the family had moved to Knowles Road, St Annes on Sea and by 1911 were living at 'Dolphinholme', 61 Orchard Road, St Annes, at which time Francis was described as an Educational Representative. They were still living at that address when he died in 1924.

Frances Alice died on the Fylde in 1915. None of the sisters ever married.

Isabella later lived in Newbury Road, although at the time of her death, in 1956, she was living at 'Shallowford', Orton, Westmorland.  Dorothy had died there the previous year.

'Shallowford', at one time known as 'Derby House', dates from the 19th century and was a laundry to Orton Hall. It had been an ironmonger's shop prior to becoming a private residence.