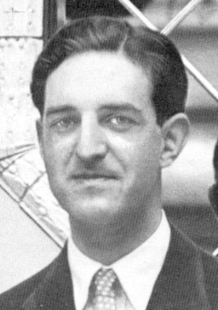 Harry, as he was known, donated twice to the Collection: Rabbiting, Lytham Sandhills in 1935 and twenty-five years later, The Beach at Lytham,1844, a watercolour by John Linnell (1792-1882).

The Squire, gambler, occasional actor and film producer is largely remembered for having squandered the vast Clifton family fortune and estate. Oxford educated, extravagant, aristocratic friend of Evelyn Waugh, Harry has been cited as an inspiration for Sebastian Flyte in Waugh’s Brideshead Revisited (The Clifton Chronicle by John Kennedy) as it is known that Waugh certainly visited Lytham Hall as a guest of the Clifton family in 1935. However, Philip Eade, author of 'Evelyn Waugh: A Life Revisited'  (reviewed in the Times Saturday Review of 25 June 2016), concludes that Waugh repaid the Lygon family, where he had spent many happy years, by immortalising them as the Flyte family.

Harry was born on 16 December 1907 at Beaumont Street, London to Talbot and Violet Clifton. The
name de Vere came from an ancestor on his mother’s side.

Harry started to buy artefacts at a young age as investment opportunities, buying objets d’art, such as Fabergé eggs, jade, porcelain, paintings by Gauguin and Tissot and Indian stone gods. Inevitably, there were some fakes amongst his purchases such as a life size stone eagle from China which he believed to be made in the Ta-Yeh period (AD 606).  His advisors at the time were shocked by his extravagance and it is estimated that  if his collections had been kept intact and sold at current prices, the Clifton fortunes would probably have been restored several fold.
At the same time Harry was a very generous man. In 1937, to celebrate the Coronation of George VI, he gifted land to the Borough for playing fields, a sovereign to each of the three hundred cottage tenants, gifts of cash to the estate office staff and sufficient wine from the cellars of Lytham Hall to enable every patient and member of staff in the Borough’s two hospitals to drink to the health of their Majesties.

His obituary in the West Lancashire Evening Gazette on Wednesday 28 November 1979 by Jill Sutton read:

Mr Harry Clifton, Fylde’s most famous landowner, former squire of Lytham, traveller, gambler and friend of kings has died in Brighton,
aged 72.  The white-bearded, nomadic recluse, once one of the richest landowners in the country and until 1937 owner of most of Lytham
St Annes, died in hospital yesterday, virtually penniless.
He had been taken ill with a heart attack, the second in a short time, at the Brighton home of his close friend for the last twenty years, Mrs Margaret Kilner, a soothsayer.