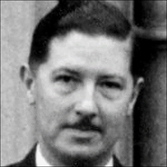 Eric Brian Porter was born in Prestwich in 1909 to Richard Herbert and Annie Porter. In 1911 the family was living  in Crumpsall, Manchester, with Richard working as a shipper’s clerk. They later moved to the Fylde, living at 'Brungerley', 208 Cornwall Avenue, Bispham. After his father’s death in 1934 the family moved to Lytham St Annes where his mother died in 1954.

Eric was a stocks and shares broker. He was a member of the Historic Society of Lancashire and Cheshire, the Chairman of the Fylde Historical and Antiquarian Society and, in 1939, was made a Fellow of the Society of Antiquaries of Scotland. Although Eric died in Bristol in 1966 his home was Horton Court, Chipping Sodbury, Gloucestershire. Originally a Norman hall with an interesting and diverse history, it is now a National Trust Property.

On 20 April 1972, Royal Licence was given by Queen Elizabeth II to his adopted son, Richard Martin Porter, allowing him to use the coat of arms that was granted to Eric on 4 March 1946 whilst he was living at Clifton Drive South, Lytham St Annes.