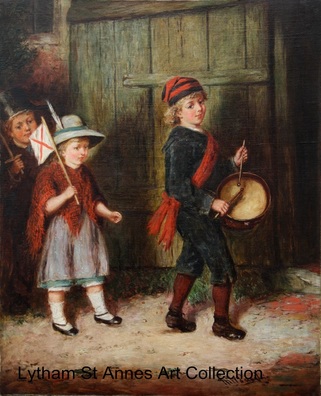 The Drummer Boy by Mark William Langlois donated by Edward Geoffrey Sergeant
Edward Geoffrey Sergeant was born in 1902 to Edward Sergeant (1850-1922) and his wife, Ann Jane, nee Proffitt (1861-1927).  In 1911 Edward Senior and his wife were living at 'The Elms' in Wrea Green and he was described as a Medical Officer of Health.  Young Edward was a boarder at Sandy Knoll School for Boys on North Promenade, St Annes.

In 1922 Edward Geoffrey married Mary Evelyn North and they had a son in 1928, John Edward North Sergeant.  They too lived at 'The Elms'. (Barratt’s Directory 1931)

In 1933 he purchased the title 'The Lord of the Manor of Kirkham' for £300. This allowed him to re-establish weekly markets in Kirkham, invoking an archaic charter granted by Edward I in 1287. These were held on the site where years before fishermen sold their catches on 'fish stones'.  As a  councillor he also wished to raise the position of Kirkham as a thriving market town.

He purchased Carr Hill House, Kirkham, a large, late 18th century house for £3000, turning it into a hotel. Carr Hill is believed to be the site of a Roman Fort around 70 AD.  In 1934 he built a racecourse, a half mile circular track, in the grounds of the hotel at a cost of £6000 and put up £300 as stake money for the first two meetings.  The second meeting attracted such a large entry that the track length was extended to one mile.

The course was closed in 1938 when Lancashire County Council acquired land between the road and the racecourse. During the war the hotel was used as an Officers’ Mess and the racecourse requisitioned by the War Agricultural Committee.

The hotel reopened after the war, and was also used as a strip club in the 1950s, but the venture failed and the building was demolished. The site was sold for building purposes; Carr Hill High School was erected there in 1958.

Edward was a dog lover, once advertising for the return of a lost beagle.   A member of the Bloodhound Breeders’ Association he advocated, in a letter to the Lancashire Daily Post in 1939, the use of bloodhounds in trailing criminals, as was done in the USA and South Africa.