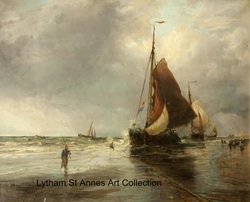 Dutch Pinks Returning from Sea” by Edwin Hayes R.H.A
Extract from Will:

“I bequeath my oil painting entitled “Dutch Pinks Returning from Sea” by Edwin Hayes R.H.A together with its frame to Lytham St Annes Corporation.”

Edith Clare Booth was born on 1 August 1884 in Wavertree, West Derby; it is believed that her father’s family lived there.  She was the only child of William Henry Booth, a commercial traveller, and Hannah Booth, nee Newton. Hannah was the second great-aunt of Jacqueline Savill's mother. The Newton family were from Manchester and previously from Warrington.

Census records showed Edith as living with her parents in Manchester between 1891-1901.

Edith remained a spinster, and as far as can be ascertained, continued to live with her parents until their deaths in the 1930s.  She was also close to her Aunt Edith (possibly named after her), nee Newton, and Uncle Charles Henry Williamson, and appeared to live near them for much of her life.

In 1911 she was recorded as living with her parents and aunt Edith at 67 Park Road, Lytham St Annes, which remained her address until her death.  There is no evidence that Edith was ever in employment but in later life it seems that she shared her home with lady companions and boarders.

Edith died on 27 May 1964 of cerebral thrombosis and bronchopneumonia. This information, from her death certificate, was supplied by John Swift, second cousin (grandson of Aunt Clara).