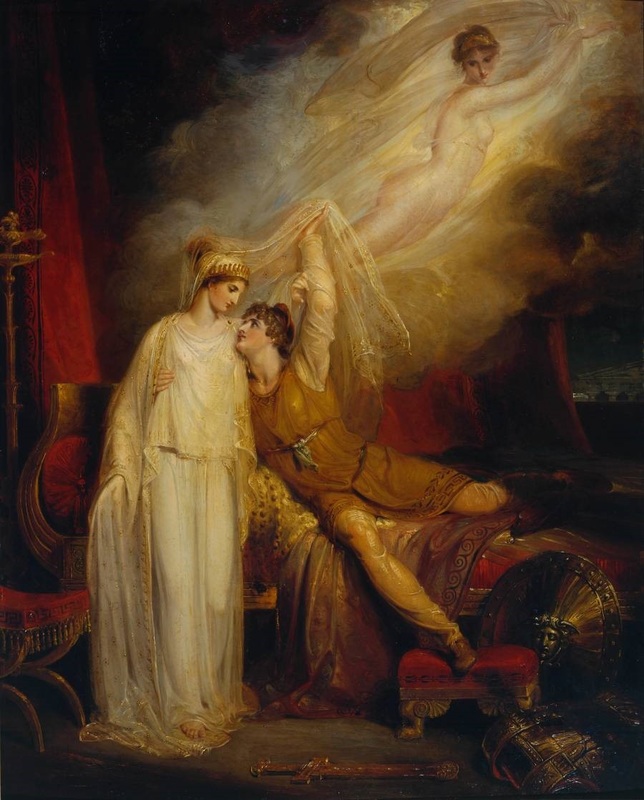 The Reconciliation of Helen and Paris After his Defeat by Menelaus (1895) by Richard Westall
Richard Westall was born in Hertford but came from a Norwich family.  Initially becoming an apprentice to a silver engraver, he was advised to take up painting by the miniaturist, John Alefounder (d 1795). He went on to exhibit at the Royal Academy in 1784 and the British Institution, mainly in watercolour, where he was described as using ‘violent and excessive colours’ as well as a more ‘Rococo prettiness’ in his figures, and as such he was reported as a leader in the reform of figure painting in watercolour at the time.

Westall also produced a number of large works in oil, but when these failed to sell he turned to book illustrating as his main source of income.  His prolific output included the works of Sir Walter Scott, Oliver Goldsmith, William Cowper and Thomas Gray.  Byron, who greatly admired his work, stated that 'the brush has beat the poetry'.  Westall was also commissioned to provide illustrations to John Boydell's editions of Shakespeare and the works of John Milton.

In addition, he provided a number of illustrations on religious themes, such as John Hobart Caunter’s 'Illustrations of the Bible' in 1835 and twelve paintings of the 'Rites and Ceremonies of the Church of England'.  These  were also engraved and became very popular, showing his work in a positive light.  His oil painting, Christ Crowned with Thorns, is the altarpiece at All Souls Church, Langham Place, London.

Unfortunately, in later life he lost most of his money by poor art dealing and other bad speculations, leaving him in poverty and reliant on relief from the Royal Academy. His last known occupation was as an 'instructor in painting and drawing to the Princess Victoria', later Queen Victoria, which he carried out for the eight years prior to his death 4 December 1836.

​Richard Westall is perhaps best known for several portraits of Lord Byron.  One of these hangs in the National Portrait Gallery in London, another at Hughenden Manor, and a third in the House of Lords.