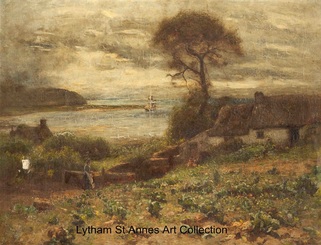 Acc No: 187, Donated by Miss Bertha Moorhouse, 49 Glen Eldon Road, Lytham St Annes in April 1932
Bertha Moorhouse was born in 1871 in Chorlton, Manchester, to Edwin and Ann Moorhouse.  Her father was a commercial traveller in drapery. Bertha’s sisters were Jessie Elverstone Moorhouse and Florence Moorhouse.

In the 1881 census the family was living in Prestwich, Manchester, where Ann died in 1883. According to the 1891 census, Edwin was living with his daughters and Bertha's occupation was given as 'organist'.

By the 1901 census Edwin and his daughters had moved to the Fylde and were living at 'Elverstone', 49 Glen Eldon Road, St Annes. At this time he was a representative for the textile manufacturer, Ryland’s.