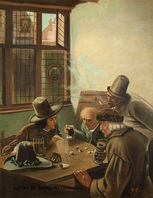 Agnes Ellen was born in Preston in 1879 to John and Agnes Webster. Her father was a cotton spinner and the 1891 census shows him and four children all working in the mill. Agnes, aged 12, was employed as a cotton weaver.

In 1901 Agnes married Thomas Kirby in Preston Registry Office. He was a house painter, born in Preston in 1878 to John and Elizabeth Kirby.

By 1908 Agnes and Thomas were living at 'Avenham', 13 Alexander Road, St  Annes and Thomas was listed in directories as a painter and decorator. Their elder son, Charles Henry, was born in Preston in 1902 and their younger, Norman, in St Annes in 1909.
Both 1924 and 1934 street records show the family living at 25 Alexander Road East.