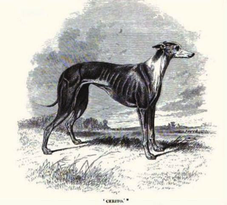 Engraving by Richard Ansdell (1815-1885)
​
Greyhounds have long been used for coursing, to hunt deer, hare and many other animals. Coursing was often the pursuit of gentlemen so it is no surprise that Squire Clifton of Lytham allowed coursing on his land and often supplied the game. (1)

This monochrome engraving is of a fawn and white coloured greyhound called Cerito, born in 1848. (2) She was a ‘celebrated’ greyhound who won the 'The Waterloo Purse' no fewer than three times, first in 1850 as a puppy and again in 1852 and 1853. 'The Waterloo Purse' was established in 1836, changing to 'The Waterloo Cup' in 1857 before finally closing in 2005. It used to attract tens of thousands of spectators to watch and gamble on the coursing matches. The best dogs in England, Ireland and Scotland competed and, for the owner of the winning greyhounds, it was an honour as high as that achieved by the owner of a winner of The Derby horse race.  In all, Cerito won forty-five courses out of fifty-three. She was voted one of the top twelve dogs of the century and many of her line also became great winners. (3)
Few dogs had won the cup more than once and her owners at that time, Messrs G F Cooke and Hinde, must have been very proud of her achievements. (4)

Note:  In 1840 Richard Ansdell produced a large oil painting entitled The Waterloo Coursing Meeting which is on display at the Walker Art Gallery, Liverpool.    The caption accompanying the painting states:
This painting shows the meeting held at Altcar, near Liverpool, in March 1840.  It was the premier hare coursing event of the season, culminating in the Waterloo Cup.  The land was owned by the Earls of Sefton.  The 3rd Earl and his Countess are among the local notables on the right . There are 73 portraits - 'all good liknesses' a contemporary reviewer notes.  In the left foreground are the greyhounds Earwig and Emperor, who contested the Cup.  This painting introduced Ansdell to many local patrons and was the springboard for his success as an animal painter. 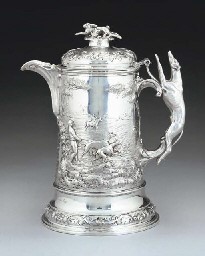 In the 1881 census Samuel was described as a miller and farmer of 200 acres, employing 17 men and 3 boys, and was a dealer in wool and corn.

In the 1901 census they were living in Edmonton, Middlesex and in 1911 at The Grange, Kingsbury, Hendon, Middlesex. They had three daughters, Phyllis, Irene and Stella. Ada’s husband was lodging in Harrogate at the Crown Hotel when the 1911 census took place. He died in 1914 in Brighton and only left Ada £250.

When she donated the engraving - by Richard Ansdell RA, entitled Cerito, (engraver unknown)Richard Ansdell - on 29 September 1941, Mrs Stephen was living at Poynings, Sussex.  Sartin notes that this was one of 4 engravings donated by Mrs Stephen, descriptions of the other 3 are unknown. (6)  She also gave a photograph of her father, Samuel J Goodwin Mallabey, President of the Ridgeway Coursing Club, Lytham (1880-1895). (7)
‘The Clifton Cup’ was presented to the Ridgeway Coursing Club by Alderman Jas Cunningham, Blackburn, during his mayoralty in 1860. (8)