Statues and Figurines in the Lytham St Annes Art Collection 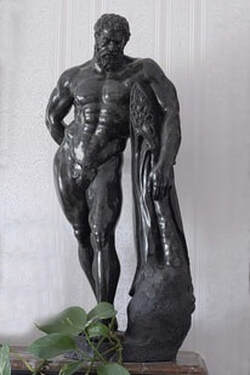 The Farnese Hercules is an ancient statue of Hercules, probably an enlarged copy made in the early          3rd century AD and signed by Glykon, whose name is Greek but is otherwise unknown.  It is a copy
or version of a much older Greek original, a bronze by Lysippos (or one of his circle). This original
survived until it was melted down in 1205 by Crusaders.


The massive Glykon copy, standing at 3.17 metres (10.5 ft), was made for the Baths of Caracalla in Rome (dedicated 216AD) from where the statue was recovered in 1546.  It is now in the Museo Archeological Nazionale, Naples.

This Italian Verde Antico (antique green) marble full length figure shows Hercules standing beside a rock, weary, leaning on his club, which has the skin of the Nemean lion draped over it.  In myths about Heracles, killing the lion was the first task of The Twelve Labours.  It has been suggested that he has just performed one of the last tasks as he is concealing apples behind his back, cradled in his right hand, the apples of Hesperides. 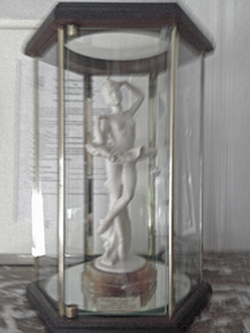