This was painted when Ansdell was at the height of his career. 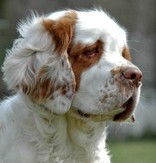 Clumber Spaniels were relatively unknown before the middle of the nineteenth century.  What is certain is that the breed took its name from Clumber Park and that the Duke of Newcastle's gamekeeper, William Mansell, is credited with their development and improvement. Prince Albert and Queen Victoria were fanciers and promoters of the breed which was shown in England from 1858 onwards.  Due to their soft mouths and thick coats, they were all the rage throughout the sporting nobility and Ansdell could well have given his Retriever a touch of the Clumber to give his painting topical appeal.  On the 16 October 1840, Queen Victoria noted in her diary:  'Walked out directly after breakfast before Albert went to shoot. We had his seven fine Clumber Spaniels with us and we went into the Slopes, with such a funny old Gamekeeper, Walters, in order that I should see how the dogs found out their game. They are such dear, nice dogs'.
This is as fine a depiction of a sporting dog as Ansdell ever produced.  The dog and its prey are depicted in amazing detail, accuracy and reality.  The face of the dog is truly amazing and is the product of a very close and meticulous study of the anatomy and the way the flesh moves and wrinkles up when carrying a bird in its mouth.  The eyes are truly glinting – the nose is undisputedly moist with a tiny smidgeon of blood beneath the right nostril.  This is characteristic of Ansdell – he never dramatised the gore, preferring to concentrate instead on the beauty of an animal doing its job.

The game bird is similarly shown with emphasis on the beauty and lines of the feathers as they are constructed in the wing.  Ansdell was known to have carefully studied birds in his studio over a long period of time.

​Ansdell found a popular vein in sporting paintings such as these, producing many variations of different breeds of dog carrying different species of birds.  To this day paintings such as these are highly sought after.  They were often produced as sets of engravings of four to six pieces for decorating gentlemen’s studies or gun rooms.  Capercaillies are found in Scottish woodlands and are the largest species of Grouse in the world.  They were introduced from Sweden during the nineteenth century after the indigenous species became extinct.

To view all the artworks of Richard Ansdell in the Collection please click on his name under Artists on the Home Page.

Recent research states:
“Originally thought to be a capercaillie, this bird is more probably a black grouse with its distinctive white tail and underwing feathers. capercaillie were extinct in Britain by the 1780s and, despite reintroduction, they and black grouse are so rare today there are restrictions on hunting them.” Amanda Draper 2018.