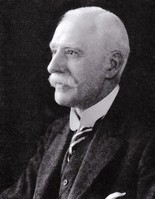 John Booth 1857-1941
The Lytham St Annes Art Collection started on 29 June 1925 when John Booth, of the famous grocery business, presented The Herd Lassie, 1876, by Richard Ansdell. Booths, founded in 1847, is the biggest independent grocery chain in the country. This painting was donated to the townspeople of the Borough of Lytham St Annes, Lancashire, to be “a nucleus for the formation of an art gallery”.

This set a much-favoured example, which was taken up by the eminent citizens of the time, whom we can thank for the large collection of very high quality art that we have today. With a desire to promote the cultural importance of the town, the recently formed Borough Council accepted these gifts with great publicity and in the spirit of generosity that was intended. The idea of an art collection, donated by local individuals for the public benefit, was most welcome. 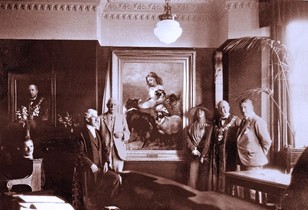 ​John Booth was the son of Bury born, Edwin Henry Booth (1829-1899), founder of Booths food, wine and grocery store. It was Edwin who bought the painting in 1895 from the Harrogate art dealer, Dyson Lister. Sir Joseph Noel Paton RSA (1821-1901), who guaranteed that it was an original Ansdell painting, was himself a well-known Scottish artist and would have known Ansdell as they often moved in the same art circles. La Belle Iseult by William Morris, now at the Tate Britain in London, is also mentioned on the receipt.

At the time of the presentation John Booth stated that it was with regret that his limited income and large family prevented him from presenting them with an art gallery but that he had no doubt there would be others amongst them who would take the hint and do what
he was unable to do.

Although the plans for a public art gallery were never realised, in 2008 when Booths opened their new store in Haven Road, Lytham, they included an art gallery within the building and fulfilled their ancestor's wish. The Fylde Gallery enabled the Collection, finally, to be put on display in a series of themed exhibitions. The Herd Lassie has been conserved, carefully cleaned and, due to her links with the family, was triumphantly displayed on long-term loan at this splendid venue. The philanthropy of the Booth family has stretched over the lifetime of the Collection, initiating it and ultimately providing the community with a beautiful Gallery.

However, in 2020 Fylde Council took the decision to cease management of the gallery whilst seeking a permanent home for the Collection. In 2022 an important milestone was reached in that Lytham Hall's Long Gallery was nominated by Fylde Council's Tourism and Leisure Committee to be the new home of the Collection.  Councillor Michael Sayward, Chairman of the Committee, said 'Lytham Hall is a treasured asset of not just Fylde but the entire nation and whilst all the venues investigated had much to recommend them, we could not but be impressed by the Long Gallery's fantastic potential and the opportunity to showcase the Lytham St Annes Art Collection in a Grade 1 listed historic attraction'.
​
In 1943, in memory of their father, the late John Booth, Major Edwin Henry Booth (1887-1951), known as Wyn, and John Kenyon Booth (1891-1970), known as Kenny, donated The Deathbed of Robert, King of Naples by Alfred W Elmore RA (1815-1881).